Robots To The Rescue? 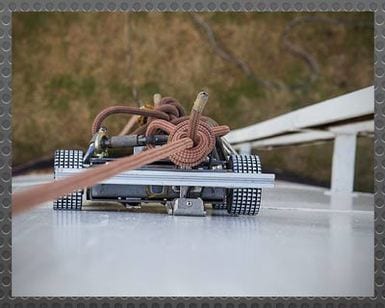 The purpose of the industrial safety training programs created by Findlay All Hazards is very simple: We’re here to help you keep your people safe. At almost any kind of workplace, you can find a task, either incidental or every-day, that puts an employee at risk. We’ll continue to present high-quality, modern training workshops and custom programs to protect humans as long as we’re here. But EHS managers are now starting to think about how some of their riskier jobs might get done without those humans.

The military has been using Unmanned Aerial Vehicles, sometimes called UAVs, but better known as drones, for at least a generation now. Remote-operated aircraft allow reconnaissance and combat missions in the air without any risk to a human pilot. A corollary to dangerous airspace at a typical manufacturing facility might be the opposite: confined space. What if we could send a robotic or remote-controlled device into such areas in place of an employee?

An article in the Greater Baton Rouge Business Report talks about how some Louisiana companies are already using ‘robo-tech’ to perform inspections in spaces that qualify as hazardous. This is a part of the strategy of exposure reduction: If a person is in no way exposed to a hazard, then they logically cannot be harmed by it.

Robots are now successfully inspecting tanks, pipelines, and other vessels in place of engineers, technicians, and safety staffers. This not only relieves the person who once performed those inspections but allows for inspections that humans could never accomplish. As the Business Report article details, robot inspectors can enter pipes as slender as four inches wide, using ultrasonic testing systems to pinpoint cracks, corrosion, and fatigue. Other inspection ‘bots can be submerged to evaluate underwater structures or vessels filled with liquid.

Drones are finding their way into common industrial facilities, too. Security teams are using inexpensive drones with wireless camera systems to help expand their field of vision. If an alarm is tripped, security officers may send a drone ahead as they approach the area of concern. The drone’s camera may tell them if they are approaching an intruder or a wayward animal – and the whir of the drone’s propellers may frighten off either of those.

Drones also make good visual inspectors of elevated platforms and towers and can fly into pipes. One limitation to drone use is the Federal Aviation Administration stipulation that any pilot must be able to see his UAV as it flies. The FAA may soon drop or modify this regulation, allowing experienced pilots to use drones at greater distances and to fly them into buildings, out of their sight.

Delivery-by-drone may be an asset to EHS managers in the near future, too, as new models are able to support greater payloads. For example, a worker may be in a high and isolated place, as you might find in a refinery. He may require an additional tool or a replacement battery for a powered device. A drone could carry the item in a basket and land that near the employee, sparing them the risk of an added trip down a maze of ladders and platforms.
Exposure reduction can certainly take advantage of the latest unmanned tech, but it may also come in simpler forms. Advanced PPE, improved gas detectors, and revised inspection and repair procedures are also ways to protect the people who still do most of the tough jobs in tight places.

On-site Confined Space Entry training from Findlay All Hazards teaches your team to create and employ strategies, not just for working in confined spaces but limiting the duration of that work. And Findlay’s OSHA training workshops incorporate the same attitude of getting the job done safely with minimal exposure.